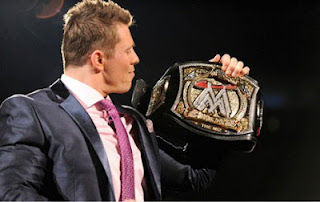 With this Sunday seeing The Miz relegated to the pre show for Extreme Rules, where does this leave the former 'Most Must See WWE Champion in History'? Everything seemed to be in place for Miz and he was heading to the magical face of the WWE position. Then CM Punk dropped his pipebomb and stole his spot. For a few months The Miz fought really hard to keep it, but in the end he just isn't as far developed as Punk. I actually feel that a CM Punk/Miz feud would be brilliant, but since we've probably had that feud in that Chris Jericho is basically the original Miz and the fact that The Miz has had the biggest de-push in history due to a couple of un-fortunate mistakes, this probably wont happen soon, if ever.
It's a shame because he was involved in some pretty entertaining moments, (usually ending up with him being humiliated) including the genius idea of inverting the WWE logo to represent his name and in turn his own logo, (which in turn again is intrinsically tied into the WWE's  corporate logo and so on), which purely speaking is a first, and a threatening repertoire that echoed Marvel Comics character Arcade, who creates fun-house/arcade game assault courses for his opponents, during his Cena feud. I think that the 'Face Turn' that was expected by some at Wrestlemania XXVIII was a golden opportunity to keep The Miz relevant in the imminent shift in focus toward new(old) faces (but then I suppose they'd only just made a point of him being conniving and nasty in wanting to team with Daniel Bryan). I also think his victory for Team Johnny in the same moment should have been the ideal way of keeping The Miz a Heel but remain relevant in a 'Team Johnny Faction/Corporation' kind of way (but then I suppose they'd only just made a point of him being untrustworthy in a team scenario).

I really hope that The Miz runs in on the WHC match or something, because it would instantly remind people he's a good prospect. And seeing as they missed his face turn perhaps he should go even further down the ridiculously self confident, arrogant and bullyish yet ultimately unskilled and cowardly while actually being a mastermind route.